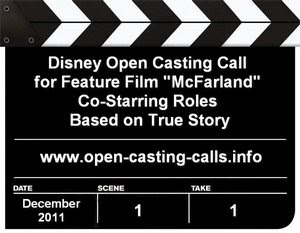 Mayhem Pictures’ Mark Ciardi and Gordon Gray are producing “McFarland”. Ciardi and Gray previously produced three Disney sports drama feature films – “Miracle,” “Invincible,” and “Secretariat”. They also produced the Walt Disney Pictures films “The Game Plan,” “The Rookie,” and the upcoming “Wish List”. The sports film productions by Mayham Pictures is in part due to the fact that Mark Ciardi is a former Major League Baseball pitcher. He played one major league season for the Milwaukee Brewers in 1987.

The casting director is seeking athletic Hispanic men ages 17 to 23 with running experience to portray the McFarland High’s championship cross-country teams of the 1980’s and/or 90’s. All roles to play high school student age. The runners come from rural California poverty stricken families. They pick fruit in the fields as well as attend school and run cross-country. Among the supporting roles to be cast are the following:

Please bring a pen and be prepared to fill out a form with your physical stats, running experience, and all contact information including phone number. The casting director has asked that you DO NOT talk on cell phones at the open casting call.

The following information and documents may be needed for for minors and foreign talent who would like to audition for “McFarland” or work as an extra on the film: