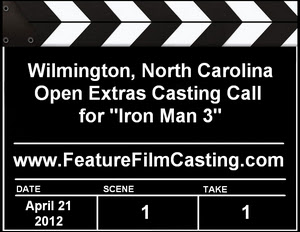 Note: This film is using the working title of “Caged Heat.” A working title is the temporary name of a film used during its development. Working titles are used primarily for two reasons; first being that an official title has not yet been decided upon and the working title is being used as a filler for naming purposes. The second being to intentionally disguise the production of a high profile film. In some cases a working title may ultimately be used as the official title. This “title ruse” is now a very common practice by which these high-profile films or television series are given a fake working title to keep its production a secret, and to prevent price gouging by suppliers, casual theft and undesirable attention. The release title of this film is highly likely to be “Iron Man 3.”

Extras casting calls and registration is underway for the Marvel Studios superhero feature film “Iron Man 3”, which will be distributed by Walt Disney Pictures. Shooting will take place in the Wilmington, NC area and other locations in North Carolina from May 21, 2012 through January, 2013. The film’s main stars are being cast out of Los Angeles, however many smaller and day player acting roles are being cast in North Carolina. All of the extras, photo-doubles and stand-ins for the films stars will be cast in North Carolina. An open extras casting call will take place on April 21st, 2012 in Wilmington, NC.

Marvel Studios President Kevin Feige has recently stated that Marvel doesn’t confirm any of their casting until it’s all completely done. And, even at that point, not talking about the characters is something he loves. However the following has been confirmed… two-time Academy Award nominated Robert Downey Jr. will reprise his role as as Tony Stark, an industrialist and master engineer who builds a powered exoskeleton and becomes the technologically advanced superhero, Iron Man. Gwyneth Paltrow will again play Stark’s closest friend, love interest, and business partner Virginia “Pepper” Potts. Don Cheadle returns as Lt. Colonel James “Rhodey” Rhodes/War Machine – Stark’s personal pilot, chief aviation engineer for Stark International, and one of Stark’s closest friends. Variety is reporting that Sir Ben Kingsley will play a character that is involved in the spread of a virus through nanobots. Guy Pearce is in final talks to join the cast as scientist Aldrich Killian, one of the creators of the Extremis virus, which was an attempt to reconstruct the super soldier serum that turned Steve Rogers into Captain America. Scarlett Johansson is not returning to “Iron Man 3” as Natasha Romanoff/Black Widow.

Multi talented actor, screenwriter and film director Shane Black has taken over the directing duties from Jon Favreau, who directed the first two films in the “Iron Man” series. Black also is writing the screenplay for “Iron Man 3”. Black has said not to expect “Iron Man 3” to feature any other heroes from Marvel’s universe saying that after “The Avengers” the plan is to go back to self-contained single-character stories. Shane Black has directed Robert Downey Jr. before – in Black’s last feature film directing job “Kiss Kiss Bang Bang” in 2005.

North Carolina has become a hotbed of filming major motion pictures as well as smaller independent films, thanks to the state’s generous 25% production credit. Although Marvel reportedly considered shooting “Iron Man 3” at Marvel Studios in California, or in New Mexico – North Carolina’s EUE/Screen Gems Studios sealed the deal. The Studio boasts 10 sound stages and a large local crew base with experience that can handle up to five productions simultaneously. Films recently shot in North Carolina include “The Hunger Games,” “The Odd Life of Timothy Green,” “The Conjuring” starring Patrick Wilson and Vera Farmiga, “The Roommate” starring Leighton Meester, and New Line Cinema’s “Journey 2: The Mysterious Island”.

The “Iron Man 3” production is looking for about 1,000 extras during filming and about 550 crew jobs (see below for how to submit for crew member work). This is for local Wilmington area residents, however people who live an hour or two away from Wilmington are welcome to attend the open casting call. Often extras carpool to the filming locations with others from the area that you are coming from.

The extras casting director in North Carolina is seeking the following:

All ages and types of any ethnicity are needed, however below are some of the special needs:

All open casting call attendees MUST bring a non-returnable recent color snapshot. It does not have to be a professional photo, but you are welcome to bring an 8×10 headshot if you have one. The photo can be a cell phone picture printed off your computer, as long as it accurately represents what you currently look like. No audition or monologue will be required. You will fill out a casting form which will be provided, and attach your photo(s). They will chat with you for a minute or two when you get to the front of the line, and that’s all there is to it. It is advisable to bring a couple of pens or pencils of your own.

The sooner you submit, the better your chances of getting cast to work on the film.

Minors and foreign talent must be legally eligible to work in the state of North Carolina and in the United States.

The following information and documents may be needed for adults, minors, and foreign talent who would like to work as an actor or extra on film and television productions in North Carolina and the United States:

In addition to the following North Carolina Actors Resources:

Experienced film crew members in North Carolina can send a resume to the crew address.

ABSOLUTELY NO ACTOR OR EXTRA SUBMISSIONS TO THIS EMAIL ADDRESS.

In this third installment of the Marvel Studios film adaptation of “Iron Man,” the storyline is going back to the exploration of the character of Tony Stark and reigning in the cocky attitude of the genius playboy Tony Stark. “Iron Man 3” will be about “getting Tony back into his world.” Iron Man will have to deal with a new nemesis played by Ben Kingsley, who is involved in the spread of a virus through nanobots.