This project is on hold. 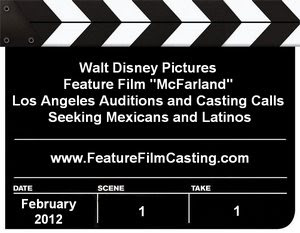 Disney’s “McFarland” will film in the Central California Valley.

Mayhem Pictures in association with Walt Disney Pictures are set to begin filming the biopic feature film “McFarland” in February, 2012. After an open casting call last December, 2011 in Bakersfield failed to discover the film’s stars and supporting roles, auditions will take place in Los Angeles. The studio and production company are open to new talent for the starring roles, which will go to teen and young Latino males.

Mayhem Pictures’ Mark Ciardi and Gordon Gray are producing “McFarland”. Disney has reupped its first-look deal with Mayhem Pictures. Ciardi and Gray previously produced three Disney sports drama feature films – “Miracle,” “Invincible,” and “Secretariat”. They also produced the Walt Disney Pictures films “The Game Plan,” “The Rookie,” and the upcoming “Wish List”. The sports film productions by Mayham Pictures is in part due to the fact that Mark Ciardi is a former Major League Baseball pitcher. He played one major league season for the Milwaukee Brewers in 1987.

Casting director Sheila Jaffe, who is brought in often by producer Mark Ciardi, is casting “McFarland”. Jaffe has been nominated for eight Primetime Emmy Awards, one for which she won for “The Sopranos”, as well a four-time Casting Society of America Artion Award winner. Sheila Jaffe is based in New York, but sets up casting out of the Mayhem Pictures production office when casting their films.

They are basically seeking the same types as they were looking for at the open casting call in Bakersfield, CA on December 17, 2011. They were looking athletic Hispanic men ages 17 to 23.

Here is the revised description of what they are casting:

• Should have a likable personality but slightly troubled because of the difficult life they have being from migrant field worker families.

• Hispanic accents are acceptable, as well as bilingual.

• Must either be high school age or be able to pass for a high schooler.

• Must be in cross-country running shape.

• Acting background is not required.

To be considered, submit a recent color photo (does not have to be professionally taken) and an acting resume (if available) to the principal actor casting director listed below. Also include a link to an online acting demo, such as YouTube or Vimeo if available. Make sure to include you location and all contact information.

Minors and immigrant talent must be legally eligible to work in the state of California and in the United States.

The following information and documents may be needed for minors and Immigrant talent who would like to audition for “McFarland” or work as an extra: