BAFTA Award winner Dan Lin is producing the film, and he has stated that the director will be looking to cast newcomers in the major roles of Aladdin and Jasmine, and that they will be discovering new people that must have acting and singing abilities

Filming will take place in London and all talent must have legal eligibility requirements to work in the United Kingdom in the entertainment industry.

Saryrn Award nominee Guy Ritchie will be directing “Aladdin” from an adapted screenplay written by Grammy Award nominee John August based on the animated classic, about a street urchin who vies for the love of a beautiful princess, and uses a genie’s magic power to make himself off as a prince in order to marry her. Max Keene will co-produce with Dan Lin. Lin Pictures president Jonathan Eirich will serve as executive producer.

Starring and supporting roles are mainly being cast through talent agents in London. However, if you are not signed with an agent and wish to self-submit, I highly recommend that your 8×10 color headshot and resume along with the cover letter be sent in a 9 x 12 Clear Full Face Window Envelope with the photo visible in the window. 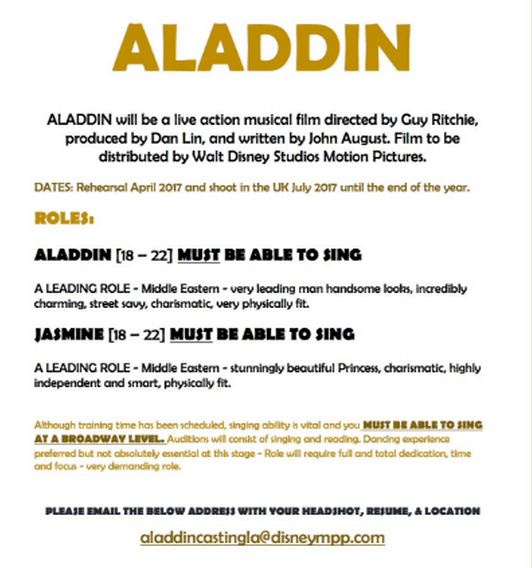